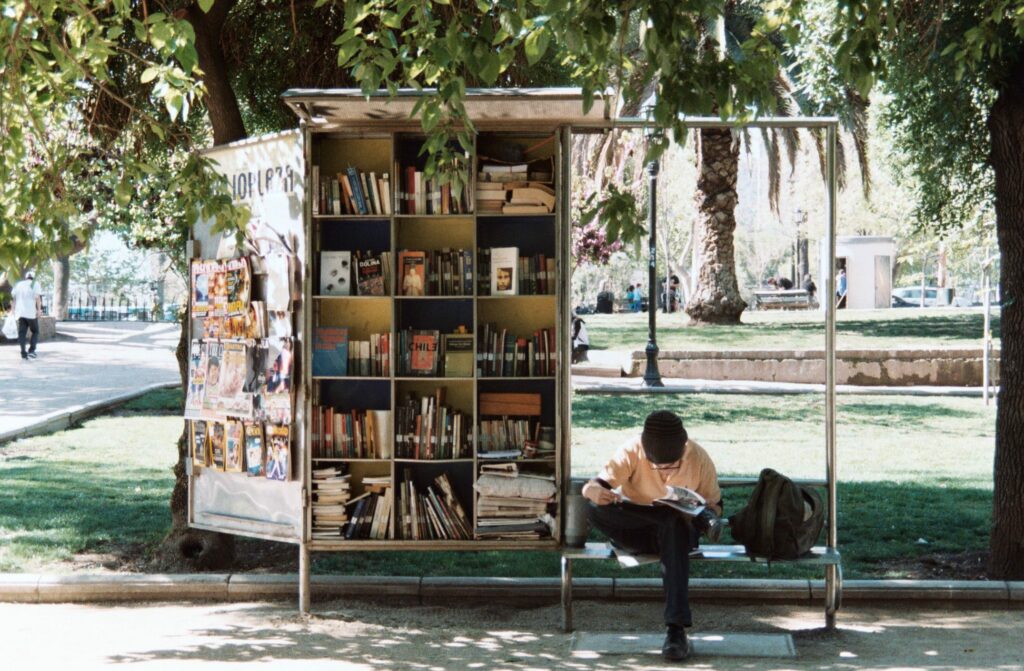 It's 9 pm, you're exhausted, and you just want to be horizontal and immobile for a while. So you head to the sofa, turn on the TV, and load up Netflix. And you find the perfect thing to binge and escape from the world with.

Yeah, I get it. (And yep, I do it too.) But each time I find a really great book I can't put down for a weekend, I remember that a good TV series isn't the only binge-worthy entertainment.

Sometimes, it's even more immersive to leap into the world of an unputdownable book and not leave it for a while. You also get to spend some time away from a screen (at least non-Kindle ones).

Here are a few recommendations of the best binge-worthy books I couldn't put down to get you started. I hope they help you to escape into a new world and forget you're reading too.

Unputdownable books to binge-read instead of watching Netflix on loop

If you loved The Martian, give Andy Weir's latest bestseller a read next. In Project Hail Mary, Ryland Grace, the sole survivor on a desperate, last-chance mission to save both humanity and the earth, is hurtled into the depths of space to complete the mission alone.

Like Andy Weir's other books, this is a fantastically well-researched, nerdy, and lighthearted show of world-building that's easy to read and hard to put down. I'd especially recommend listening to it as an audiobook – it's a perfect choice for road trips.

Over on Goodreads, Bill Gates shared about this sci-fi hit: "[Project Hail Mary] is a wild tale about a high school science teacher who wakes up in a different star system with no memory of how he got there. The rest of the story is all about how he uses science and engineering to save the day. It’s a fun read, and I finished the whole thing in one weekend."

2. The Gifted School by Bruce Holsinger

If you tore through Liane Moriarty's Big Little Lies or the screen adaptation, this gripping page-turner by Bruce Holsinger should be perfect for your next read. In The New York Times Book Review, it's described as "wise and addictive … The Gifted School is the juiciest book I’ve read in ages."

In the privileged and uneventful community of Crystal, Colorado, a group of close friends are raising their families in harmony. That is until news begins to spread that a 'gifted school' will be opening its doors in town.

Places will be sparse, the competition ferocious, and as the facade of their picture-perfect community begins to fade, long-buried secrets threaten to surface under the pressure.

3. I Am Pilgrim by Terry Hayes

I've recommended this thriller to so many people. I Am Pilgrim was released back in 2013, and I picked it up after seeing several people glued to their copy on the train who would get off at their stop and immediately sit down to keep reading it.

Then, I became one of those people... then my Dad, my brother, husband, friends. Yeah, it's a good book to binge-read, even for people who don't usually read.

When I first started listening to Mad Honey as an audiobook, I thought this whodunnit might be too intense for how I've been feeling (I've been gravitating towards easy-going and hopeful books lately).

But after a bit more listening, I was hooked. I finished the 464-page book in a couple of days... oops. Mad Honey is a gripping book to binge-read, about what we choose to keep from our past and what we choose to leave behind.

Olivia McAfee knows what it feels like to start over, after leaving her picture-perfect life in Boston – married to a brilliant cardiothoracic surgeon, and raising a beautiful son, Asher— to return to the house she grew up in, taking over her father's beekeeping business in a sleepy New Hampshire hometown.

This seems like the new start she needed... until Olivia receives a phone call that Lily, the new girl in town, is dead. When she hears that Asher is being questioned by the police, she wonders if she really understands her son at all.

5. The Seven Husbands of Evelyn Hugo by Taylor Jenkins Reid

Looking for something lighter? The Seven Husbands of Evelyn Hugo is fantastic. It's the type of book I can read in just a few days, unable to stop reading it for too long but not wanting it to end either.

Aging and reclusive Hollywood movie icon Evelyn Hugo is finally ready to tell the truth about her glamorous and scandalous life. But when she chooses unknown magazine reporter Monique Grant for the job, no one is more surprised (and confused) than Monique herself. As things become clearer, she was right to feel surprised – but should also be concerned.

On Reddit, Impossible_Action_82 shared: "My cousin, my partner, and I all read The Seven Husbands of Evelyn Hugo in 1-3 days this past month. That book is excellent. Shockingly deep, deals with identity and relationships and family. Just a really really good read. Side note: this cousin doesn’t usually read anything."

If you ask book lovers for their best can't-put-down recommendations, you'll probably soon get bored of hearing 11/22/63. But it really is good.

When President Kennedy died on November 22, 1963, the world changed forever. But here, Stephen King asks - in his characteristic gripping and terrifying way – what if someone could change it back?

That person turns out to be Jake Epping, a thirty-five-year-old English teacher in Maine, whose friend and owner of the local diner, Al, lets him in on a secret: his storeroom is a portal to the past, a particular day in 1958, where every turn leads, of course, to a troubled loner named Lee Harvey Oswald.

Over on Reddit, pkosuda shared: "I could never binge read any book but this one may have been the closest I ever got. Every free moment I had I spent reading the damn thing. Could not put it down. Definitely an underrated book and I wish there was somehow a sequel."

7. The Secret History by Donna Tartt

The Secret History is one of the best books for dark academia vibes, centered around a group of isolated classic students at an elite New England college. If you want to nerd over the cult-favourite book as you read it, I’ve compiled a list of the 30+ books mentioned in The Secret History.

In a Reddit thread about books you can't put down, AdamWestsButtDouble shared that, "It’s been more than 25 years, but my answer to this will always be Donna Tartt’s The Secret History. I’d gotten into it a bit and was going to read some before bed one night, about 11pm. Cut to four hours later and I’m still reading."

Verity has a different vibe than Colleen Hoover's other books; it's moodier, darker, and much creepier. You also really shouldn't start reading this thriller at night if you want to sleep.

Lowen Ashleigh is a struggling writer on the brink of financial ruin when she accepts the job offer of a lifetime: completing the remaining books in a successful series by bestselling author Verity Crawford. But her excitement changes to fear when she stumbles upon the unfinished autobiography Verity never intended for anyone to read.

If you're looking for a brilliantly plotted sci-fi thriller that's mind-bendingly strange, read Dark Matter. It's one of the best binge-worthy books to make you forget you're reading.

The last thing Jason Dessen hears before the masked abductor knocks him unconscious is this question: "Are you happy with your life?" He awakens to find himself strapped to a gurney, surrounded by strangers in hazmat suits, and a man who Jason has never met saying, “Welcome back, my friend.”

This life and world he's woken up to isn't the one he knows. But is it this world or the other that’s the dream? And even if the home he remembers is real, how can Jason possibly make it back to the family he loves?

If you loved watching The Crown but would enjoy it even more with a slice of murder mystery, The Windsor Knot is my top binge-worthy book recommendation for you.

The morning after a dinner party at Windsor Castle, eighty-nine-year-old Queen Elizabeth is shocked to discover that one of her guests has been found murdered in his room, with a rope around his neck.

When the police begin to suspect her loyal servants, Her Majesty isn't so sure. For it turns out that the Queen has been living an extraordinary double life ever since her coronation, honing a brilliant knack for solving crimes. Can the Queen and her trusted secretary Rozie catch the killer, without getting caught themselves?

11. The Kiss Quotient by Helen Hoang

I've been binge-reading Helen Hoang's books lately. I don't usually read books with this much romance. But these books with fantastic themes of self-discovery and autism in the mix are a superb place to start.

The Kiss Quotient is the first in a series of three interlinking books, focusing on three characters whose new partners give them a whole new view of love – and themselves.

If you love The Kiss Quotient, here are 8 books to read next with Helen Hoang vibes.

Published in 2018, Circe is Madeline Miller’s defiant reimagining of the daughter of Helios, the sun god, and the ocean nymph Perse, known in myth as a dangerous sorceress, perhaps the most dangerous woman a man could come across.

When her gift threatens the gods, she is banished to the island of Aiaia where she hones her occult craft, casting spells, gathering strange herbs and taming wild beasts.

But she won’t be left in peace for long, and it’s for an unexpected visitor, the mortal Odysseus, for whom Circe will risk everything. Binge-read this and get excited for the HBO Max adaptation of Circe which we'll hopefully hear more about soon.

For more gripping book recommendations to get lost in, remember that unputdownable books don't have to be fiction. Here are some of the best can't-put-down non-fiction books that read like fiction.