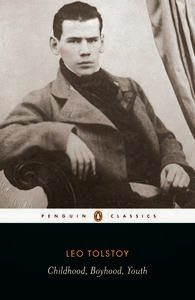 Leo Tolstoy began Childhood, Boyhood, Youth - a trilogy - in his early twenties. It is a vibrant account of a young person's emerging awareness of the world, himself, and the people around him, as described through the eyes of Nikolenka. Themes of shyness, self-image and self-improvement permeate the book, yet we are also exposed to a young Tolstoy's wider descriptions of nature, art and the workings of the world.

Tolstoy later dismissed the trilogy as an "awkward mixture of fact and fiction", which is perhaps somewhat accurate. I wouldn't say it was awkwardly written, but rather that it encapsulates the awkward transition between childhood, boyhood and youth through a first person perspective. Also, I found the "mixture of fact and fiction" to be intriguing. The text could easily be read as biographical, if you were not aware of the finer details of Tolstoy's early years. For instance, whilst Tolstoy had no direct memory of his mother who died when he was two, the protagonist Nikolenka's intense mourning of his mother at eleven years old drives the structure of the text forwards. Moreover, Tolstoy's father was killed when he was nine, leaving him and his siblings in the care of their grandmother and later of their aunts. Alternatively, Nikolenka's father holds an important role throughout Childhood, Boyhood, Youth.

As mentioned in the introduction of my edition by Judson Rosengrant, the trilogy could be classed as a bildungsroman. However, it doesn't depict a growth of the protagonist as such. Instead, a lurching process of formation is illustrated by Tolstoy, alongside the striving self-awareness that informs and impels it. There is remarkable depth and subtlety to the trilogy, particularly in the psychological and moral insight of Nikolenka's constantly evolving inner life. By reading the intimate descriptions of Nikolenka's journey to maturity, we are privy to some of Tolstoy's own preoccupations as a young artist and thinker. I will not be bold and state that the protagonist is an exact mirror of Tolstoy - I do not agree with this either. However, there are certain parallels that appealed to me, having previously read around Tolstoy's early life and youth.

For one, there's the perfectionism and striving for improvement that applies to both Tolstoy and Nikolenka. When Tolstoy was eighteen, he began a "Journal of Daily Activities, in which he would set out his day and create rules that would supposedly develop his willpower. I find Tolstoy's perfectionist tendencies fascinating (largely because they remind me of myself), and they impelled me to write about his journal in my post "Tolstoy's 'Rules' and Perfectionism". Equally interesting is Nikolenka's perfectionism here in Childhood, Boyhood, Youth. Nikolenka becomes friends with Dmitry Nekhlyudov, an introverted yet ambitious young man, who inspires him to strive for improvement and create his own "Rules of Life". The narrator reflects,

[Under] Nekhlyudov's influence I involuntarily adopted his outlook, the essence of which was a rapturous adoration of the idea of virtue, and the conviction that man's purpose lies in continual self-improvement. To reform all humanity and eradicate all human vice and unhappiness seemed plausible enough to us at the time, just as it seemed an easy and uncomplicated matter to reform ourselves, to master all virtues and be happy... God alone knows, however, just how absurd those noble dreams of youth were, or who was to blame that they were never realised...

There's so much to think about from this passage. Firstly, out of Nikolenka and Nekhlyudov, which character is most similar to Tolstoy himself? Was Tolstoy a young man who inspired others, or one who was inspired? I'm inclined to think that he was primarily the latter but became the former, although I'd like to research this more. My favourite part of the above quote, however, must be the final sentence, in which the narrator - seeming incredibly close to the author himself at this point - reflects on the frequent futility of youthful self-improvement. Tolstoy's efforts were often as fruitless as Nikolenka's (and Nekhlyudov's), and the following phrase can easily apply to both author and character:

Although the idea of compiling rules for all the circumstances of life and always following them was one that attracted me as both extraordinarily simple and great, and one, moreover, that I intended to put into practice, I once again seemed to forget that it needed to be done at once, and kept postponing it for another time.

Another part of the trilogy that struck me was the gambling addiction of Nikolenka's father. This vice similarly applied to Tolstoy's father, grandfather and later Tolstoy himself, and so it's interesting to consider how this afflicted the author when growing up, and to question whether he applied these feelings to Nikolenka.

Reading this trilogy demonstrates how Tolstoy's ideas about human nature were first very much engaged with the world, and were later changed and modified by his growing experience of it. On a wider contextual level, many of the stances, techniques and themes utilised in the trilogy come to full flower in Tolstoy's later works. Some of the most moving parts of War & Peace depict the death of loved ones, for instance, a theme that was very much set in play by Tolstoy in Childhood, Boyhood, Youth.

I'd certainly recommend this trilogy, particularly if you've read other novels by Tolstoy. I found it quite easy to read, although I have to say that I found Youth to be the most exciting section.