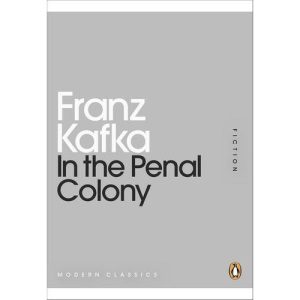 We sell a few of the Penguin Mini Modern Classics at work - they're lovely slim short stories that cost a mere £3.00. This Franz Kafka edition, containing In the Penal Colony and The Judgement, only amounts to eighty pages. Therefore I could easily read it during a work shift. As the story is so short, there will be spoilers in this review!

I haven't read anything by Kafka before, although he's an author that I always thought I'd like. I certainly enjoyed reading this, but these two short stories were disturbing, to say the least. The first, In the Penal Colony, tells of a traveller shown the elaborate workings of a brutal machine. The officer who has devoted years of his life to the machine explains to the traveller, in greatest detail, how the sentence of the condemned is carved onto their skin by the contraption. Then, the condemned man is effectively left to die over the course of twelve hours. However, before that happens, a kind of realisation is discernable in the face of the sufferer:

[The officer:] "How we all absorbed the look of transfiguration on the face of that sufferer, how we bathed our cheeks in the radiance of that justice, achieved at last, and fading so quickly!"

Why can't the torture stop there if the prisoner is aware of his crime? Also, what exactly is the "transfiguration" mentioned? Rather than a realisation of the condemned man's (supposed) crime, it seems to me more an understanding of the sanctity of life in those last precious moments.

One of the most brutal aspects of the story is the complete lack of justice. The condemned have no awareness of their crime, and receive no trial. Despite language being inscribed on the body, there is no real communication between prisoner and the law. Arguably, justice is received by the officer at the end of the story, when he ironically faces the wrath of the machine he's tended for so long. Yet as the condemned man shows no sign of humanity towards the officer who had earlier saved him from the machine, is the prisoner as morally wrong as the officer? He is left to die a violent death that's gruesome to bear witness to, despite his prior cruelty to others.

There is such a sheer amount of pain entailed in this execution method. It reminded me slightly of the Mongolian torture by skinning mentioned in Murakami's The Wind-Up Bird Chronicle. They both result in slow, incredibly painful and drawn-out deaths: what I'd certainly presume to be the worst kind. I half expected the traveller to be exposed to the machine himself, but I like that Kafka doesn't write in such an obvious way. It's quite worrying to think what could have influenced Kafka to write such a narrative, or if it is based on anything. The penal colony is akin to hell on earth and heavily stuck in the past, and it's inhabitants are all too keen to escape:

They could have jumped into the boat, but the explorer lifted a heavy knotted rope from the floor boards, threatened them with it, and so kept them from attempting the leap.

I found that passage quite sad, really. It's a very effectively written ending.

There are three works by Kafka included in my 100 Classics Challenge, and I look forward to returning to his work.