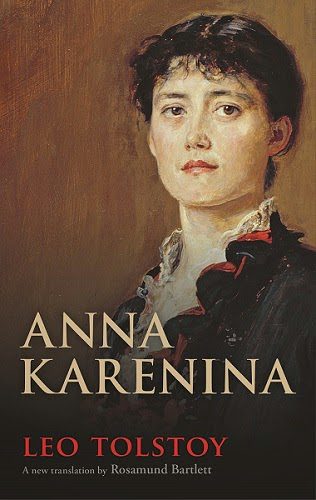 I don't give Anna Karenina enough attention here on Tolstoy Therapy. In fact, I've never given the novel it's own, dedicated post. Now that Rosamund Bartlett, author of my most-loved Tolstoy biography, has translated the novel, this will certainly change.

In fact, the one translation I've read of Anna Karenina was the Pevear and Volokhonsky. I wasn't overwhelmed by their translation of the novel, but considering my opinion of their War and Peace, I think it's time I try something new.

Bartlett's translation provides the perfect opportunity. Published by Oxford University Press, the book is currently available as hardback and ebook (I'm reading the latter). I'm planning to provide you with a few articles on my opinion of the translation itself, alongside ways in which we can apply Anna Karenina to our own lives. These will be posted as I read the book over the coming weeks.

- Levin in Tolstoy's Anna Karenina, from the Bartlett translation

Let's talk about the introduction

To say the least, the introduction is extensive, which is what I was expecting from the author (as a biographer of both Tolstoy and Chekhov). For some readers its detail and length might seem overwhelming - it took me several train journeys to finish - but I think there's nothing wrong with skipping an introduction, or returning to it after finishing the book.
Bartlett covers the historical and political context of the novel, alongside Tolstoy's growth as writer and thinker. She writes with beautiful astuteness to illustrate Anna Karenina in its own time, as is the case here:

'Everything was confusion in the Oblonsky's house', we read in the opening lines of the novel. Everything was also confusion in Russia. It is thus understandable why, at an age of such social and political upheaval, why some of Tolstoy's more progressive readers were nonplussed by the idea of a novel about an aristocratic woman who has an affair with an army officer. It seemed out of date to them, and their author out of kilter with his age. But of course Anna Karenina is very much more than a society novel.

Rather than simply stating facts and biographical details, Bartlett explains what these really mean for the novel. She situates the publication of Anna Karenina in a time and place which we can actually imagine and compare to modern society.

Bartlett goes on to consider Tolstoy's path to creating the novel as we know it today. In January 1872, Tolstoy attended the autopsy of a young woman he knew called Anna Pirogova. Bartlett writes: "Spurned by her lover, she had thrown herself under a goods-train at Yasenki, the railway station close to Yasnaya Polyana which had opened only five years earlier."

The following year, Tolstoy read an article by Alexandre Dumas (fils) which responded to a recent controversial trial in which a husband was given a light prison sentence for murdering his unfaithful estranged wife. These factors - alongside an unfinished sketch for a story by Pushkin with an immediate narrative style catching Tolstoy's eye - led to a draft of the novel's opening first finding itself on paper.

For new and existing readers alike, Bartlett's introduction does much to illuminate Tolstoy's shaping of Anna Karenina and our modern reading. The introduction also makes a neat defence of her translation decisions, which I'm curious to see on display in the novel itself (there's nothing too surprising, but we'll cover this later). So far, so good.

Have you read Anna Karenina? How does a British translation with a comprehensive introduction sound to you?