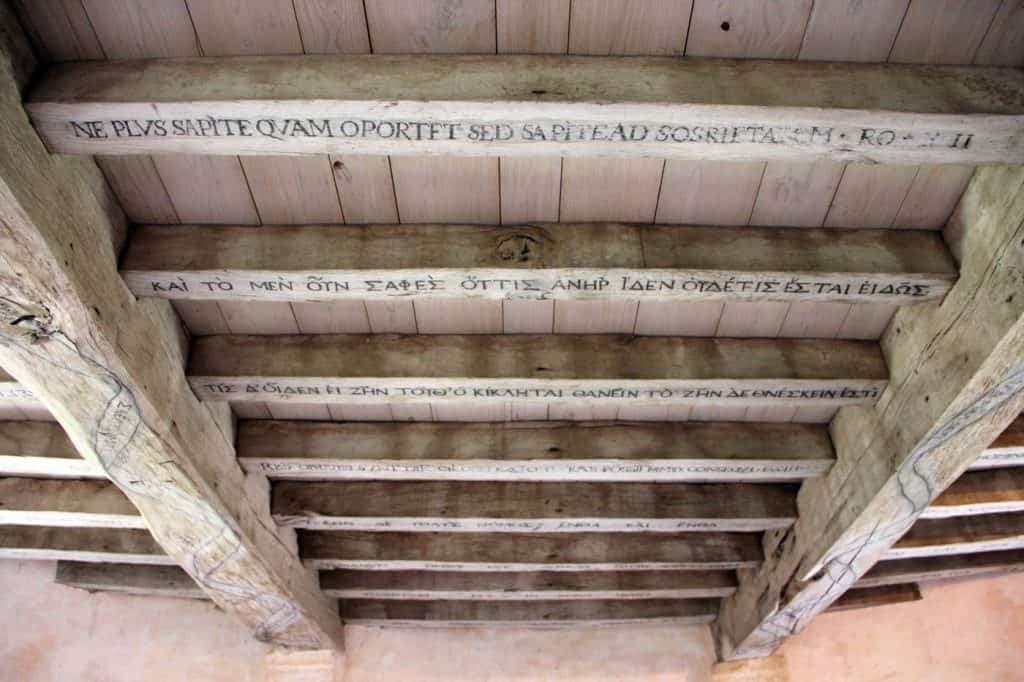 Montaigne's ceiling of quotations.
A quick note that some of my posts contain affiliate links. When you buy through these links, I may earn a commission.

knew a lot about low self-esteem. He realised how the achievements of others can make us feel less worthy, despite being a lawyer, twice mayor of Bordeaux and a friend of the King of France.

He understood what makes us feel bad about ourselves, largely: bodily worries, the feeling of being judged by others, and intellectual inadequacy.

Montaigne was also convinced that we are surrounded by the wrong role models, people who aren't at all like ourselves. This was spoken by a man born in 1533, but it is so applicable today. Because we can't relate to the people we're meant to look up to and aspire to be like, feelings of inadequacy are inevitable.

Although philosophers often see reason as the solution to problems, Montaigne perceived problems as being caused by our reason and over-thinking of issues.

As the body is so rarely mentioned in public, we're led to think of it as shameful. Montaigne knew a woman who ate behind a curtain for fear of being seen chewing, and a man who requested to be buried in his underpants to retain his privacy.

We must accept the ordinary in ourselves.

We need to accept how akin we are to animals. In fact, Montaigne felt that the animals on his chateau farm surpassed humans in many ways. They're not shy, nor do they bother themselves with needless worry and anxiety. We should accept our bodies with good grace and a touch of humour.

We must open our eyes to all that counters our cultural status-quo. Travel physically or simply in your mind, and greet the diversity of the world. Socrates declared himself to be a citizen of the world, not merely Athens, and we should tell ourselves (and others if you choose to be vocal) the same.

Montaigne felt that most university graduates were "blockheads". Teach yourself and develop the skills that really matter in life: how to live well, deal with death, end a relationship, and confront anxieties (among so many others). Work on your humility and modesty, and accept your intellectual limitations. If you do this, you have no reason to feel intellectually inadequate. After all, outward symbols of intelligence are often incredibly different to reality.

Some Words of Wisdom

In his study, surrounded by a thousand books and space to pace, Montaigne had a ceiling covered in inscriptions of essential wisdom. Some of which are below, amongst other sayings of Montaigne.

"On the highest throne, we are seated, still, upon our arses"

"Everything is too complicated for men to understand"

"Why torment yourself with worries that are outside your self control?"

You can find more of Montaigne's wisdom in his Essays,

or take a read of Sarah Bakewell's How to Live: Or a Life of Montaigne in One Question and Twenty Attempts at an Answer