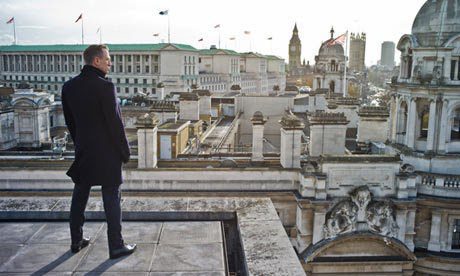 I went to go and see the new Bond film last night, and must say I really enjoyed it. There was plenty of action, humour, and "Britishness" - everything that a Bond film needs, really. At one point M quoted Tennyson, a moment which was always going to be a winner with me. You can watch the clip on Youtube here.

The addition of the poem did feel a little staged, but I love intertextuality in films (the Dickens A Tale of Two Cities reference got me through The Dark Knight Rises, for instance).

Below is the passage that was quoted. It's taken from Tennyson's Ulysses, which the poet famously claimed described his own "need of going forward and braving the struggle of life" after his friend Hallam's death. It's a very fitting choice for the circumstances in the film, and as Poet Laureate during much of Queen Victoria's reign, he's a very patriotic choice.

The Tennyson quote read by M:

Tho' much is taken, much abides; and though
We are not now that strength which in old days
Moved earth and heaven; that which we are, we are;
One equal temper of heroic hearts,
Made weak by time and fate, but strong in will
To strive, to seek, to find, and not to yield.

I hope you gain some personal meaning from the poem, as I have. The last two lines of the above passage are on a post-it next to my desk, for reference when I'm having a bad day and not feeling particularly strong.

It's such a great poem to read for a bit of bibliotherapy – especially if, like me, you're working through trauma. It helps me realise that although I've been through some bad experiences (haven't we all?), it doesn't mean that I'm weak or need to be stuck in the past.

If you want to read more of Tennyson's forever-relevant poems, you can find a collection of his poetry here.