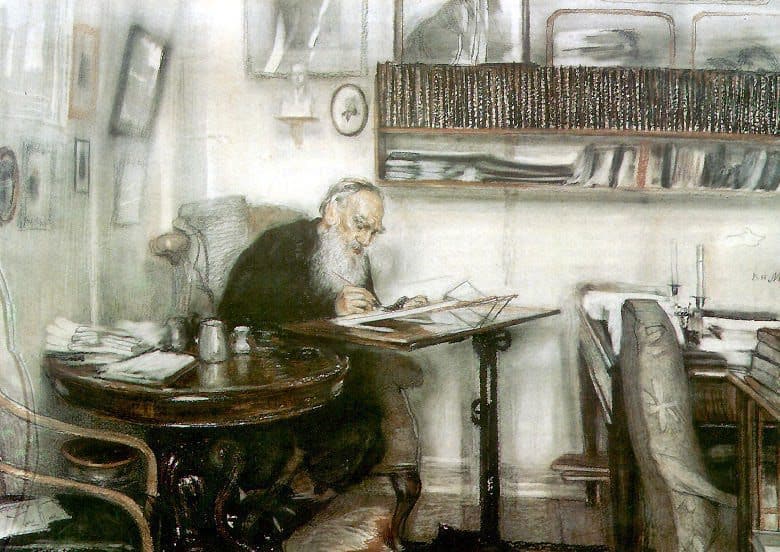 When researching Tolstoy, I find myself noticing a common theme of failure: of not being quite good enough, of not carrying out goals, and of getting into all kinds of trouble.

In War and Peace, there’s Pierre’s bumbling insecurity and failure to live up to expectations in the early stages of the novel, culminating in the policeman-tied-to-a-bear incident.

Like Pierre, Tolstoy also suffered from peer pressure in his own life. This was namely the influence of the most good-looking of his brothers, Sergey, who had a reputation for good humour and singing continually (as described in Rosamund Bartlett’s biography).

In his memoirs, Tolstoy admits that he “actually wanted to be him”, and as they entered adolescence, Tolstoy made the bad decision to follow Sergey’s choices.

After Tolstoy turned fourteen in August 1842, Sergey and another of his brothers, Nikolay, took him for the first time to a brothel. As he later admitted to a friend, after his first sexual experience he stood by the woman’s bed and wept.

Tolstoy regretted the lack of moral guidance during his teenage years, and confided in his diary on 1 January 1900 that:

No moral rules were instilled into me at all – none; yet round about me grown-ups were self-assuredly smoking, drinking and leading a dissolute life […] And I did a lot of bad things, without wishing to – simply from imitating grown-ups.

In his "Rules of Life" which he later compiled in his journal, Tolstoy would amusingly aspire to "Visit a brothel only twice a month".

Critic Lisa Zunshine describes Pierre in War and Peace as a “conscious little rock” for having no idea why he acts the way he does and allowing his sensual desires to triumph over rationality.

Much the same could be said for Tolstoy. Yet because of this, Tolstoy and his fiction seem so real. Failure couldn’t be more human.