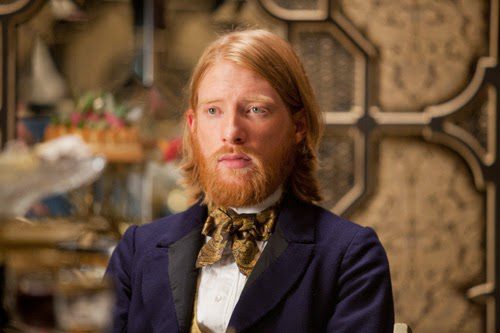 I shared some thoughts on the introduction to Rosamund Bartlett's translation of Anna Karenina at the start of October, happy to have found a new edition of Tolstoy's classic novel. War and Peace has always seemed to win more of my attention, but I think that's largely due to the diversity of translations available and the rereads I've enjoyed. So I'm glad there's a new, exciting and high-quality translation of Anna Karenina available as an alternative to the standard Pevear & Volokhonsky found in most bookshops.

I began the book impressed by the introduction, and I'm enjoying it more and more as it progresses. Although it was quite difficult to get used to, I'm appreciating Bartlett's dedication to the original Russian. It's not always pretty and it's often repetitive, but it's accurate, and Bartlett somehow manages to convey a wonderful sense of beauty at the same time. I'll write more about this as I get on with my reading.

Now that I'm in the midst of the novel, I'd like to share a series of posts - focused on the Bartlett translation - encouraging you to give it a go too. This week, let's celebrate one of the most-loved characters of the novel: Konstantin Levin.

What's so special about Levin?

1. He's innately good, as opposed to so many others in the novel

Levin strives to achieve worthy goals and be a good person, and on the whole he succeeds. He's an idealised figure for Tolstoy, as he becomes for many readers of Anna Karenina, and he's a wonderful character to watch develop.

Hypocrisy in whatever guise can deceive the cleverest and most perceptive person, but the dullest of children will recognise it, however artfully it may be concealed, and be repelled. Whatever Levin's faults, there was not a shred of hypocrisy in him, and so the children displayed to him the same friendliness they found reflected in their mother's face.

2. Yet he's not at all perfect

Levin's story of transformation is a central part of the plot, and we see him progress from an anxious, awkward and confused young man to a happy and settled husband and father. The first part of this story is perhaps the most interesting, and we realise that Levin, just like all of us, has flaws. As one example, we can consider his inner dilemma about how to deal with his troubled brother:

A battle was going on in his heart between the desire to forget now about his unfortunate brother and the recognition that this would be wrong.

3. He feels anxious and self-conscious, although we realise he has no reason to

Levin, like Pierre in War and Peace alongside Tolstoy himself, experiences nerves like the rest of us. In the early stages of the novel, we see him trying to cultivate calm in front of the beautiful and kindhearted Kitty Scherbatsky:

He walked along the path towards the skating-rink, saying to himself: ‘You mustn’t be nervous, you must calm down. What’s the matter with you? Be quiet, stupid!’ he told his heart. But the more he tried to calm down, the more breathless he became.

However, it's not just love that evokes anxiety and self-consciousness in the character:

‘Yes, there is something loathsome and repellent about me,’ thought Levin as he left the Shcherbatskys and set off on foot to see his brother. ‘And I don’t fit in with other people. Pride, they say. No, I don’t have any pride. If I did, I wouldn’t have put myself in such a position.’

4. Tolstoy shows us how he struggles in society

Levin is most at home in the countryside, mindfully turning the hay or roaming his estate with his hunting dog. City life, however, brings out a frantic and unsettled side to Levin:

Whenever he arrived in Moscow, Levin was always agitated, frantic, slightly awkward, and annoyed by this awkwardness and, more often than not, came with some completely new and unexpected way of looking at things.

5. He sees the good in others

Levin isn't just good in himself, he also has a positive outlook that allows him to appreciate the good in others. When Stiva laments that Levin has "everything ahead of [him]" while he feels hopeless, Levin responds, "Surely you don’t have everything behind you?" Levin is a good friend and quick to find a positive instead of a point to criticise: something I know I should remember.
This even extends to Vronsky, Levin's rival standing in the way of his affection for Kitty:

There are people who, when meeting their victorious rival in whatever arena it might be, are immediately ready to turn their back on all that is good about him and see only bad things; and then there are people who, on the contrary, take pains to locate in this victorious rival the qualities with which he defeated them, and who, with an aching heart, look only for good things about him. Levin belonged to the latter category.

Can you relate to Levin and feel inspired by his transformation, as I do? Alternatively, does his character frustrate you slightly?

To all fellow fans of Anna Karenina, what do you love most about the novel: character, theme, or otherwise?