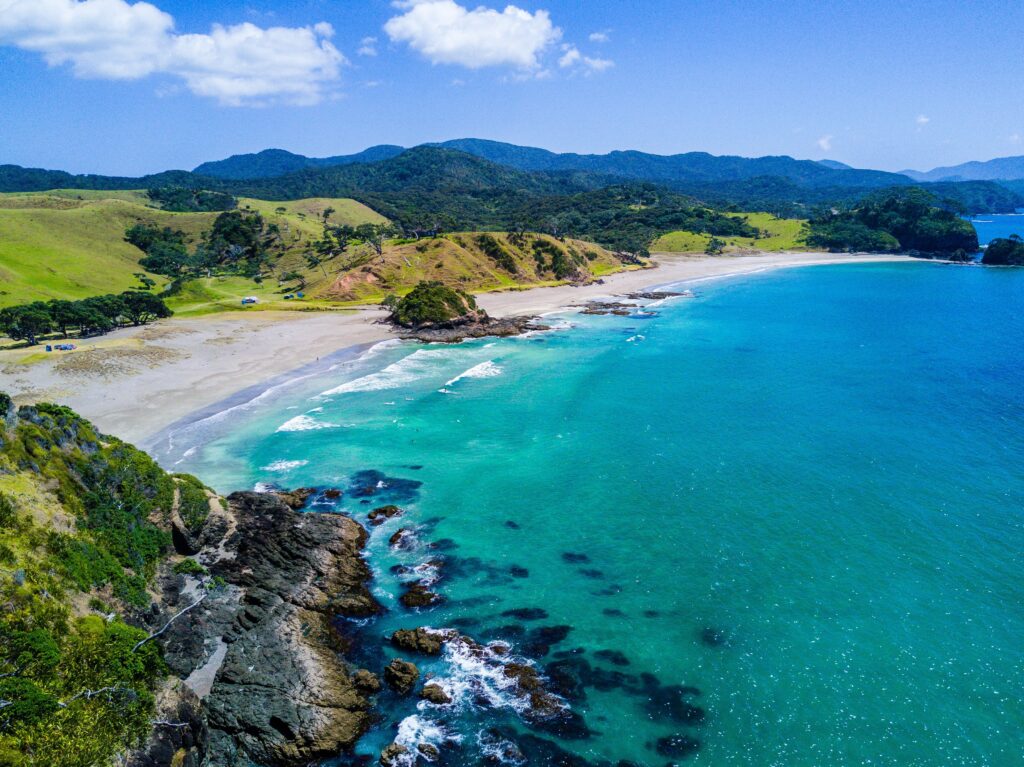 Photo by Rod Long
A quick note that some of my posts contain affiliate links. When you buy through these links, I may earn a commission.

If only there were more books like Circe by Madeline Miller...

Circe is a dream of a book. It's the perfect example of the Greek myth retold genre that's been exploding in the last few years – what with The Silence of the Girls by Pat Barker and The Penelopiad by Margaret Atwood among others – but the reason I loved Circe goes deeper.

If I had known how beautiful the descriptions of nature would be, I'd have read Circe (and Madeline Miller's other novel, The Song of Achilles) much sooner.

After unleashing magic that she never believed she could be capable of, Circe, the daughter of Helios, is banished to the island of Aiaia.

Rather than acting as her prison, Aiaia provides her sanctuary. Her days become focused on honing the art of pharmaka – the magic of herbs – as she forages, picks, blends, brews, and experiments with what she finds.

With the unlimited time available to her as an immortal, her spells and tinctures grow more refined and potent. She transforms men into swine, creates powerful protective chants, and treats her ailments and those of others. Her island makes for the perfect retreat for us as reader, too.

Here are some of the best books to read next if you liked Circe, featuring their own unique blend of magic, nature, myth, and strong women.

If you haven't yet, I’d wholeheartedly recommend reading Madeline Miller’s short story Galatea, which has recently been published as a beautiful (and tiny) hardcover for the first time.

Like Circe, Galatea is a story focused on transformation, or as Miller explains in the afterword, on “finding freedom for yourself in a word that denies it to you.”

Here, Madeline Miller reimagines the myth of Galatea (“she who is milk-white”); the most beautiful woman her town has ever seen, carved from stone by Pygmalion, a skilled marble sculptor, and blessed with the gift of life by a goddess. Here's my review of Galatea.

If you loved the nature and magic of Circe, Uprooted is a fantastic choice to read next. We meet Agnieszka, who loves her quiet home, her village, and the nearby forests and glimmering river.

But it's a fantasy novel after all, and the corrupted Wood stands on the border, full of malevolent power casting a shadow over her life.

To keep safe, Agnieszka and her people have to make a sacrifice to the evil wizard, the Dragon, every ten years. That sacrifice is a young woman handed over to serve him for ten years, and the next choosing is fast approaching.

3. A Thousand Ships by Natalie Haynes

Published in 2021, A Thousand Ships is one of the most popular books to read if you loved Circe. This gripping novel by Natalie Haynes puts women, girls, and goddesses at the centre of one of the greatest tales ever told: the fall of Troy.

4. The Mercies by Kiran Millwood Hargrave

If there's a Nordic equivalent to Circe, it's The Mercies. Set in the winter of 1617, the sea around the remote Norwegian island of Vardø is thrown into a vicious storm.

A young woman, Maren Magnusdatter, watches as the men of the island, out fishing, perish in an instant.

The island is now a place of strong women, and The Mercies is a tale of what follows in the beautiful, brutal environment.

5. The Signature of All Things by Elizabeth Gilbert

Less about myth but very much about the beauty of nature, The Signature of All Things is a stunning book about one woman's life, love, and self-discovery as a botanist.

The novel follows Alma Whittaker, the daughter of a poor-born Englishman who makes a great fortune in the South American quinine trade. Alma inherits his money and his mind, and as she becomes a botanist of considerable gifts, her story soars across the globe.

For another book by Elizabeth Gilbert with plenty of self-sufficiency, foraging, and living off the land, read The Last American Man.

It's non-fiction that reads as myth, offering an intriguing portrayal of a man who left his family's comfortable suburban home to live close to nature in the Appalachian Mountains.

6. The Silence of the Girls by Pat Barker

In The Silence of the Girls, one of the most immersive books like Circe, the ancient city of Troy has been under siege by the powerful Greek army for a decade, waging bloody war over a stolen woman: Helen.

In the Greek camp, another woman – Briseis, former queen of one of Troy's neighbouring kingdoms, now Achilles' concubine – watches and waits for the war's outcome.

This wonderfully nuanced portrait of previously hidden figures is magnificent, brought to life by Pat Barker's decades-long study of war and its impact on individual lives.

Now in 2022, Pat Baker has just published her newest retelling of one of the greatest myths, The Women of Troy.

7. The Snow Child by Eowyn Ivey

A magical book to read after Circe is The Snow Child. It's Alaska in 1920 – ruthless for most people, but especially for new arrivals Jack and Mabel.

Childless and drifting apart, the season's first snowfall brings them together for a moment to build a child out of snow. The next morning, the snow child is gone – but they glimpse a young, blonde-haired girl running through the trees.

The girl seems to be a child of the woods, who hunts with a red fox at her side and somehow survives alone in the wilderness. Jack and Mabel come to love her as their own daughter, but in this beautiful, brutal place nothing is quite as it seems.

“I am not the feminine voice you may have expected.” Lavinia is a book entirely written from the perspective of a character that never utters a word: Lavinia in Virgil's epic, The Aeneid.

Delicately crafted by the queen of fantasy sci-fi, this is a richly imagined and beautiful novel of passion and war, reimagining a silenced voice just like Madeline Miller achieved with Circe.

9. Where the Crawdads Sing by Delia Owens

Where the Crawdads Sing has been recommended everywhere in the last few years, but if you haven't read it, it's got similar strong-woman-in-nature vibes to Circe.

We meet Kya Clark, the so-called Marsh Girl, who’s survived for years alone in the marshland that she calls home, finding friends in the gulls and building an encyclopaedic knowledge of the natural world. But when handsome Chase Andrews is found dead, the local North Carolina coastal community immediately suspects her and her quiet life in the wild is shattered.

If you enjoyed this, here are more books like Where the Crawdads Sing to read next.

10. Pandora's Jar: Women in the Greek Myths by Natalie Haynes

Do you wish you knew more about Greek mythology? If so, Pandora's Jar is a great choice to read next.

Putting the female characters on equal footing with their menfolk, the result is a vivid and powerful account of the deeds – and misdeeds – of goddesses Hera, Aphrodite, Athene, and Circe.

It's not just the goddesses that Natalie Haynes reimagines: away from Mount Olympus, it's Helen, Clytemnestra, Jocasta, Antigone, and Medea who sing from these pages, not Paris, Agamemnon, Orestes, or Jason.

11. The Wolf Den by Elodie Harper

The first book in the Wolf Den trilogy (Book 3 is scheduled to be published in 2023), The Wolf Den is the gripping tale of Amara, the beloved daughter of a doctor in Greece until her father's sudden death plunged her mother into destitution.

Now, Amara is a slave and prostitute in Pompeii’s notorious Wolf Den brothel. But intelligent and resourceful, and buoyed by the sisterhood she forges with the brothel’s other women, Amara's spirit isn't broken.

Amara finds solace in the laughter and hopes they all share... and realises that the city is alive with opportunity, even for the lowest-born slave. But everything in Pompeii has a price. How much will Amara’s freedom cost her?

12. The Bear and the Nightingale by Katherine Arden

If you imagine a Russian spin on Spirited Away, The Bear and the Nightingale would come close. At the edge of the wilderness in this fairytale-like book, winter lasts most of the year and the snowdrifts grow taller than houses.

Vasilisa doesn’t mind the cold – she spends the Russian winter nights huddled around the embers of a fire with her siblings, listening to her nurse’s fairy tales.

The family honours the spirits in these stories, knowing them to protect their homes from evil, but when Vasilisa’s mother dies, her father brings home a new wife who forbids this.

More hinges upon their rituals than anyone knows, and as danger circles, Vasilisa must call on dangerous gifts she has long concealed to protect her family.

For even more books like Circe, retreat into these books about wild nature. You can also read more about Madeline Miller's novel-in-progress, Persephone, and the upcoming HBO adaptation of Circe.